It has been a while since I've posted a new entry, and that is because there haven't been many additions to the collection the past few months.  I did post a new graded card today: 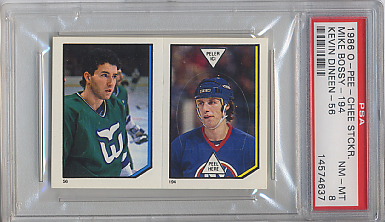 NM-MT normally isn't a great grade, but it's hard to imagine a lot ofgraded OPC stickers are out there.  Also, another 1991-92 Pro Set Award Winners card came up on eBay which I snatched up.  Still, not much new.

The site does look different, as Webs.com started using a "Gallery" image posting system.  I must say I think it's a pretty big improvement, and the site is better because of it.

In any event, I'm still on the lookout for more Kevin Dineen cards that I don't have (or even some that I do have).  I suppose that it's gotten to a point that I have most of his cards, that finding new ones will get harder and harder.  That's a good thing, I suppose, but I'd love to find some new cards (especially those two team issued cards I missedout on last January).

Oops, you forgot something.

The words you entered did not match the given text. Please try again.